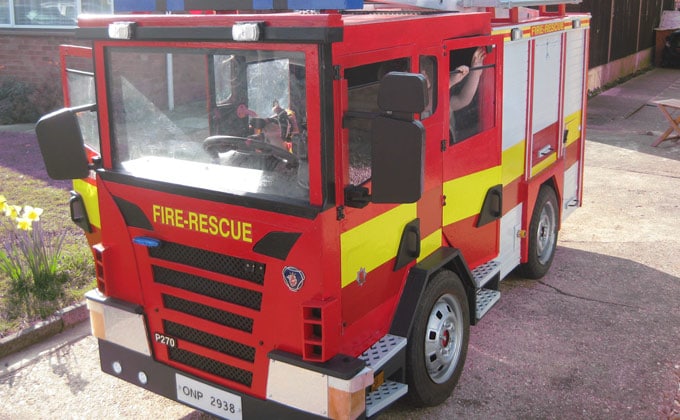 If your boy wanted to be a fireman when he grows up what would you give him for his birthday? For one young man the answer was a scale model of a fire engine built by his dad complete with its own battenburg kit!

After being approached with a photo of a full scale fire unit and some initial drawings of the scale model, PVL were able to offer a number of options and provide guidance on how this one off fire unit could be made to look authentic. The result was a bespoke battenburg kit which complimented the many hours of hard work that it took to produce the ultimate birthday present.

Needless to say there was a very happy birthday boy and several of the PVL team who are very envious.

“In November 2010 I decided that I wanted to build something for my son in wood, something he could play in and that no other kids would have. I decided on a fire engine and set about building it at my parents place in Essex, the only place with space. I basically built it in two parts; the cab first followed by the main section and then join the two together.”

“All was going well until we had all that heavy snow, then work was stopped and progress delayed.”

“I wasn’t working to any plans just using pictures and photos from the real thing. It wasn’t until mid 2011 that I decided on using a Scania appliance as the model to build towards.”

“I could have just painted it, but with all the money and time spent on it I wanted to ensure it looked the business! To male it look striking it had to be the red and yellow battenburg design, so I took to the internet to find a supplier.”

“I looked at a couple of companies that supplied high vis tape, battenburg stuff etc. and then had to bite the bullet and explain what I was doing, hoping that I would get a reply!”

“PVLUK were superb from start to finish. They offered to supply all the kit to my requirements taking into consideration my costs etc and showed interest in the project from day one.”

“I was concerned that I might just be another customer, pushed to the bottom of the pile behind other more pressing customers, but I never felt that at all through all my dealings with the company and Keven as my main point of contact was fantastic. Having supplied all the measurements there followed some e-mail tennis, but so was the focus by Keven and his colleagues to produce a professional product. I could not believe the professionalism and helpfulness of the company. When the product finally arrived, I could not have been more impressed. Each section was individually wrapped and marked accordingly. It made the fitting so much easier to someone who was quite cautious and nervous in applying them to fire engine. I remember ringing Keven and commending him and his colleagues on the finished product. It was superb.”

“Yes I put a lot of time and effort into the fire engine, but the kit provided by PVLUK really finished it off and made it look professional and authentic and by all the comments from impressed passers by, worth doing.”

“In conclusion, I cannot praise or thank Keven and his colleagues enough for producing a fantastic project. Their customer service was outstanding from start to finish. I really did think that I would be “just another customer” where goods would be supplied and that would be it”. Far from it, thank you so much.”

“It is a shame that I am not in a position to be able to recommend them to other people, because I would without a moment’s hesitation. Probably the most professional and customer focussed company I have ever encountered. Thank you.”